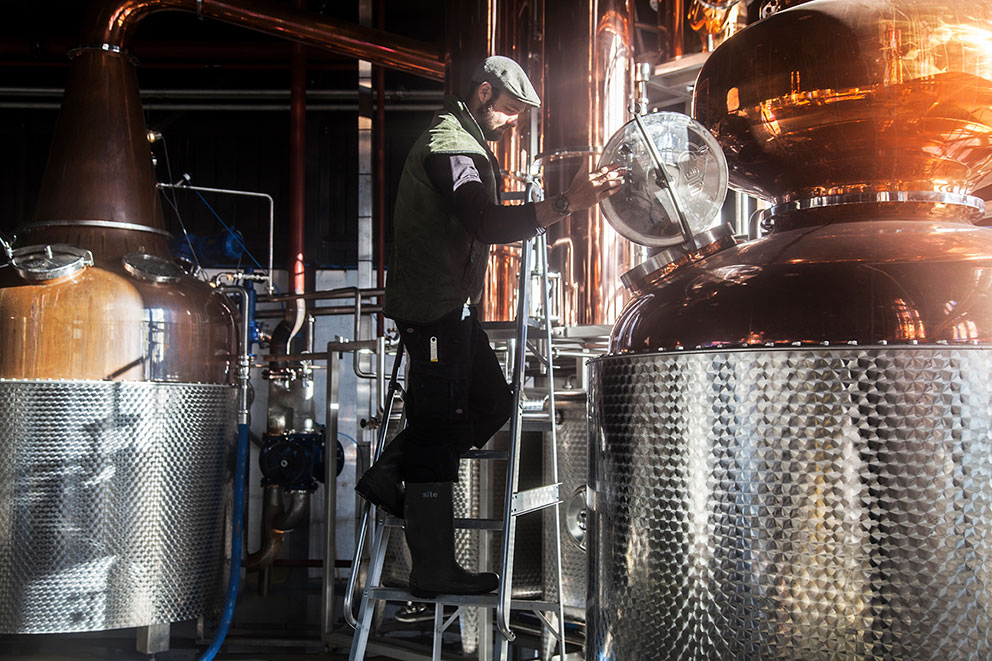 Produce: Craft Gin, Vodka, Whisky made and bottled from scratch on the Highand Estate.

We often talk about traceability and provenance with regard to food, but it is rare to find this in the distillery world. In fact, Arbikie is one of only a handful of distilleries in the country, that make their own grain neutral spirit.

The Stirling Family have farmed at Arbikie, Angus since the 1660’s. The farm sits above the glorious Lunan Bay, and the estate land rolls all the way down to the sand dunes.

Most craft gin stories start at the distillery, but farming is in the Stirling’s DNA, and it is for this reason that their unique story starts at the farm. During Alexander Kirkwood Stirling’s turn at Arbikie, he developed it from a 50-acre farm, to a 2000-acre estate, becoming one of the largest producers of potatoes in the UK. Now in his 80’s, AK has handed the business down to his 3 sons, Ian, John and David. Their joint vision is to pass the Arbikie distilling ethos down to the next generation.

The history of their farm ingrained in them, the sons found 4 elements that were the catalyst for setting up their special distillery: rich Angus growing soil and bracing weather, a natural supply of water onto the farm, fresh from the Angus hills, an abundance of fantastic quality but misshapen potatoes, and finally the history that in 1794 a distillery had been part of Arbikie…….it was meant to be!

To produce the basis of all gin and vodka, most distilleries have to buy their grain neutral Spirits, because it is difficult and expensive to produce. Arbikie sets itself apart by growing all the ingredients that make up their world class vodka and gin. Arbikie is one of the few distilleries to distil their own spirit from scratch. Why? It is not in the Stirlings’ nature to buy an ingredient in, if they can make a superior version themselves.

With their farming genes and a drive to become the most progressive distillery in the world, Ian, John & David Stirling, are now also attempting to produce the botanicals for their “farm to bottle” spirits.

AK’s Gin - strong overtones of butterscotch with a sweetness coming through from the fresh honey, a beautifully smooth textured gin and very different to Kirsty’s Gin

Chilli Vodka - Chipolte chilli’s from Chili-licious in Fife – soaked in Arbikie potato vodka, make an amazing Bloody Mary and don’t just take our word for it, they are served at the Ritz Hotel in London!

Kirsty’s Gin has won the Gold Medal at the International Spirits Awards (the Oscars of the Spirit World) and was also named Top 10 Female Distiller in the World by The Spirits Business.

FREE delivery to your door across the UK.